Where Is The Rain?

We were beginning to think that the weather was deliberately teasing us. The bureau of meteorology had been predicted a severe storm now for days. We decided to graciously accept our good fortune and wandered back down to Seven Mile Beach. A morning stroll and another geocaching attempt were in order.
As it was the last day of our mini break, the rest of the day was spent chilling with our own choice of activity ranging from reading, watching a movie, playing Nintendo and travel planning for trips that are unlikely to ever happen.
Our last treat was dinner at Bangalay Dining, the onsite restaurant. The menu was inspired and influenced by Australian "bush tucker". We thoroughly enjoyed it. It certainly was a great way to end our time at Shoalhaven. By the time we finished dinner, the promised storm finally came. The temperature plummeted accompanied by strong winds and rain.

Still Waiting For The Rain

Once again it rained overnight and once again, the sun was shining when we woke up. So once again there was no sunrise photo attempt...moving on!
Today was "geocaching take 2" day at the Grotto Walk and this time, we had extra troops in the form of the Berlees. Fortunately for us, they were well versed in the art of geocaching. And this time...success! Not just once but twice! As we logged our successful find, we just hoped that the previous geocaching party was NOT from Victoria. I just thought I'd mention that even though the camera and the tripod haven't made any appearances this trip, they did get an excursion being carried all around Nowra.


The gang of 9 moved on to lunch at The Butter Factory. The restaurant was quaint and the setting scenic, but the service was very slow and the food only average. The rest of the day was spent back at the villa. We played boardgames until the Berlees had to leave at dinner time with only two rounds to go. We all just assumed that our plans would've led to ultimate victory. Our own dinner consisted of Chinese takeaway from the local shops. It was surprisingly decent! And once again on cue, the rains came in the dark...

Waiting For The Rain

This wannabe photographer had all sorts of grand plans prior to the trip. Mastery of bracketing, focus stacking, sunrise photography, ocean photography and beach photography was to be achieved. All photographic equipment in possession were packed and lugged down south. The rain started late last night and so the alarm clock for sunrise was turned off on account of the rain. It didn't take much to dissuade me...However, when we awoke, it was NOT raining...Hmmmph! There was a part of me that was secretly happy.
We made the most of the blue skies to tackle Ben's walk and try our hand at geocaching. Apparently we were bad at it. After much argument and deliberation, we were no closer to finding the "treasure". The exertion that was expended had to be compensated for by big milkshakes. Luckily there was a store in Nowra that was known for milkshakes. After the endorphin releasing exercise, the children opted for a dip in the ocean before the predicted rain. We returned back to the villa and walked the short distance to Seven Mile Beach. Elliot, the sand hater, tolerated a brief walk before going back to the villa. The younger two revelled in the water, burying themselves in the sand and hoping that the passing dogs did not use them as peeing posts.

We arranged for lunch to be delivered to the villa from the onsite restaurant. We were pleasantly surprised by the quality of the food. We thoroughly enjoyed the wagyu beef rolls, buttermilk fried chicken and seafood curry. Best of all, they were part of the shop small promotion so it was an extra $5 off! Woohoo!
Dinner was a highlight. We dined at the highly rated South on Albany. How could we not dine at the restaurant named after ourselves?! The inner restaurant critics came out in the children. "The quail breast tasted like felafel" announced one child. Yes dear, that was because chick pea was one of the feature ingredient. "The fish was like a good hotel restaurant fish but not a standout" the second child commented. The third chipped in with "the poached pears in the dessert was well cooked but the creme caramel was too firm". Sheesh!!! Tough crowd tonight! Nonetheless, it was lovely family time and overall the consensus was that the meal was enjoyable.

It would be remiss of me to write about the start of our mini getaway without some context.
As we were heading home from Disneyland in late January, we watched the news with interest about a new coronavirus sweeping across China, feeling sorry for the residents of Wuhan. I briefly mentioned "coronavirus" on our February Singaporean girls getaway. Come early March 2020, the virus had found its way onto every corner of the world and a pandemic had been declared. By 18 March, Australia closed its borders and we went into lockdown. Europe and New York city were ravaged with deaths and horror scenarios of hospitals being overwhelmed occupied our thoughts. Australia, in hindsight, was spared from the worst due to a combination of reduced Chinese tourists as a result of the bushfires and from closing our borders early. Malcolm was caught up in a frantic attempt to ready our hospitals and our response. We had to cancel our trip to Fiji. Life in a few short months, changed. We couldn't see our elderly parents, we couldn't dine out with friends, we worked and schooled from home. Australia had made it through drought, fire, flood and pestilence. We were secretly waiting for frogs...Jesting aside, just as Australia had seemingly got control of the virus with most states reporting no new cases in weeks and state borders days from reopening, Victorian Covid-19 numbers started exploding with community transmission now well established. Melbourne returned to lockdown and the state of Victoria was quarantined from the rest of the country.
With the challenges of recent months, our end of the year trip seems likely to be a pipe dream due to soaring numbers in the Americas. With the re-introduction of restrictions imminent in NSW, this short escape was sorely needed by our travel obsessed family.
Fortunately for us, the restriction for intrastate travel was lifted in June. It was a challenge to find luxury accommodation in Australia that didn't cost an arm and an a leg. However, we managed to find Bangalay luxury villas at Shoalhaven which fortunately was fully refundable up until 2 weeks prior to travel. It was conveniently located by the beach and the golf course, and a relatively easy 2.5 hour drive from home. We said "Thank you, Ma'am" and booked it on the spot.
The start didn't start off as planned. Malcolm was obviously rusty on his Australian road trip routine. His usual "leave before the sun comes up" didn't happen on account of taking too long to set up the bike rack...Apparently you can't rush perfection. Our usual early morning McDonald's was also delayed by Google taking us via the Hume Highway instead of the M1 to get to our surprise stop off...Dapto! With a deluge forecast from mid-Saturday onward, Malcolm had ordered two replacement controllers for our Nintendo Switch so that we could play Over Cooked 2 and Moving Out. Our usual go to of JB Hifi was out of stock! Dapto Big W had a 25% sale, actually had some in stock and offered click n collect so Dapto it was. We had our McDonalds fix at Dapto too, right next to good old Dapto Dogs...classy!

Our second stop was to accommodate Elliot's daily Japanese speaking session with his teacher. Whilst he conversed his heart out in Japanese in the car, the rest of us tried to spot whales to no avail. I'm not even sure if it was whale season...Our back-up activity was to see who could balance the longest on one leg on the railings. Fortunately Elliot's session didn't last too long.
We had great hopes of an awesome stop in Berry. The quaint pretty town was going to be our lunch stop finishing off with freshly made donuts. The heavy holiday crowds and the poor physical distancing skills of youth saw us aborting. In light of what was going on in Melbourne, the hugging and kissing was difficult to stomach. When we had to constantly tell people to stand back (because they were so close they were touching us!) we knew it was time to go even without fulfilling the donut craving. We bought pies to take away instead, headed straight for Shoalhaven and consumed our goodies by the beach.


Seven Mile Beach, where we ate our lunch, was a 12.5km (making it 7.8 mile) stretch of beach. Conveniently, beach access was a mere 50m walk from our villas. We were fortunate enough to be able to check in early. We decided to take the opportunity for some family golf in the absence of rain. It was 9 holes of ambrose fun in 2 carts. Elliot was the surprise standout with consistent great shots all hit with a 6 iron!
We decided not to push our luck and headed back to the villas. I'll quickly give a brief review now. Our villa had a spacious living area, with modern and comfortable furnishings. It was well equipped with a kitchen and washing machine. The bathroom was, unfortunately, singular, but it was large, clean and mould free! The beds were comfortable. We were surprised when were delivered goodies for a tasty continental breakfast. It may not be enough for big eaters but the fresh provisions were sufficient for us. The attached restaurant serves very good quality food and offers in villa delivery/dining at a decent price. Location was perhaps the biggest plus with the aforementioned golf, beach, Shoalhaven River and a skatepark/bike circuit all within easy walking distance. Close by, one could also find decent pizza, chinese, a bottle shop and local fish & chips. The minor downside was that mobile reception was patchy and the internet was not the fastest.

Once we were settled into the villa, the children offered no resistance to offers of playing the Nintendo Switch. Pizza was the choice for dinner, and it was pretty good for a local pizza shop!

Where Is The Rain?

We were beginning to think that the weather was deliberately teasing us. The bureau of meteorology had been predicted a severe storm now for... 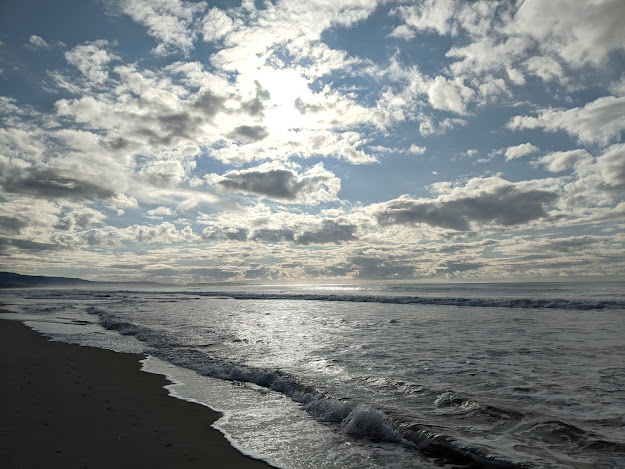